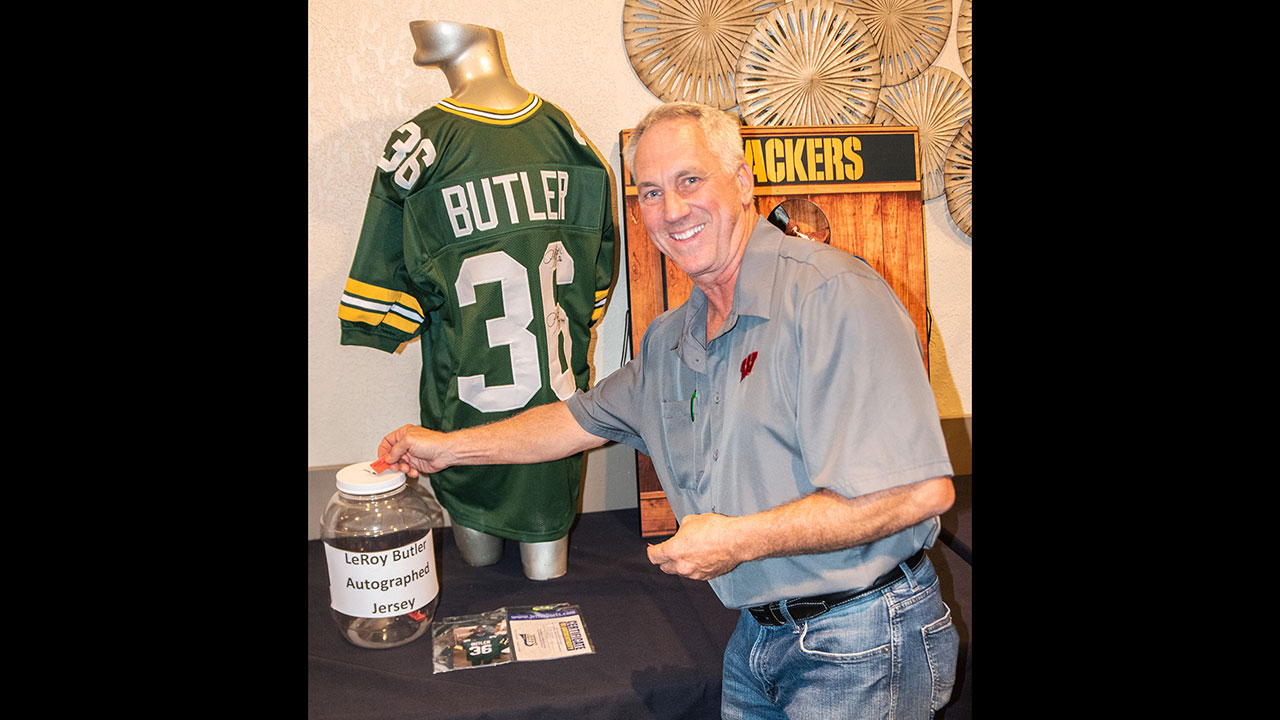 Each $100 raffle ticket allows one person to come to the drawing and Tailgate Party. Over $2,000 in door prizes will be given out to those in attendance that night. Others who have contributed to the purchase of a ticket can attend for $10. Free food, beer and soda make it a fun event.

Winners were drawn at the 2022 Raffle Tailgate Party on Monday, Sept. 12, 2022 at Village Bowl . Included in this year’s In-House raffle was an autographed LeRoy Butler Packer jersey.  The famed defensive back was voted into the NFL Hall of Fame this year.

It Happened Again for Many at the 2021 Packer Raffle

Wild screams of joy pierced the air at the Village Bowl when Shannon Dederich and her group won the Grand Prize at the 25th Annual Optimist Packer Raffle held on Monday, September 13, 2021.  Shannon, who had won $250 in 2013, captured a trip to Lambeau Field to see the Green and Gold take on the Los Angeles Rams on Sunday, Nov. 28, a package valued at more than $5,000.

There were numerous other repeat winners including newly named “Optimist of the Year”, Larry Podolske, whose $250 prize marked the 4th time he and/or his wife hit paydirt in the event.  Linda garnered $250 last year and in 2008.  And Larry won $600 five years ago.

Another repeat cash-in was registered by Village Bowl employee Jeff Sonnemann whose $250 award matched what he won in 2012. But those earnings were surpassed by the $500 he tallied in 2011 and the $1,000 that he copped in 2019.

Former Optimist member Dave Meyer of Germantown also hit the trifecta adding a $400 win this year to the $250 in garnered last year and the $500 he picked up in 2008.

Also winning cash for the third time was Bruce LaPointe of Milwaukee who matched his $250 prize to that which he was awarded in 2017 and 2018.

Another club member getting in on the action again was another raffle captain Herb Gross who added $250 to the group win he was part of in 2011.  Herb’ son Adam of Germantown kept it in the family by taking home second prize of $1,000.

Other Optimist members sharing in the wealth were Fred Blanke ($600), Terra Chmielewski ($250) and Todd Paulus.

Todd, two-time club president, was involved in probably the most bizarre chain of events which started off last year when he won the free entry to this year’s contest (ticket #350).  But not being content with just one entry (and probably wanting to support the club as a whole) he proceeded to buy ticket #163 which won him one of this year’s $250 cash prizes.  Then his ticket #350 was drawn to again give him a free entry into the 2022 contest!!!

Other $250 winners this year included Carol Muenich and Keith Songstad both of Menomonee Falls, Renee Hitt of Waukesha, Carrie Bence of Hubertus and longtime Friend of Optimism Don Matovich, owner of DJ”s Goalpost in the Falls.

Chad and Laure Demmon in Elm Grove bought a ticket from their neighbor JJ Selland, former club president.  They also qualified for a $250 award, but generously decided to give it back to the club for our continued efforts as “Friends of Youth.”

Because Shannon and her gang are not going to Green Bay till November 28 (Shannon’s birthday by the way), final figures for the raffle are not complete currently.  But while hopefully exceeding $20,000 in profit, this year’s event will not match last year’s earnings of $22,900 nor will it come close to the record setting mark of $23,869.23 reached in 2019.  Never-the-less, once all the data is complete, the club will be pushing the $300,000.00 level in total take for the past 14 years of the raffle.