It has come time for me to reflect on my year as your Club President. I wish to thank you all for your support and assistance this past year. One of my goals when I started my term was to get more members involved with our many activities and committees. I have seen numerous people step up and take leadership roles. My thanks to all of you for your help and assistance. I feel privilege to lead our Club, and want to thank all of the work that previous leaders, committee chairs, and “Worker Bees” have invested to establish our Club’s strength.

My wish is that you continue your involvement.  Should you feel you are not ready to head a committee or activity, I would like you to select some area that interests you, and just help. Become a “Team Helper”. You will realize great rewards and personal growth.

“When you stop growing you start dying.”

Let us all continue to grow Our Club in support to the youth of our community and Club membership. My challenge to you is that you should find and recruit a new Club team member to be your successor, co-helper, and Club friend.

As you do this, you will help ensure our Club’s ability to serve our youth into the future.

We will be having our first night meeting under our new president in a beautiful basement meeting room below Marigold Marketplace N89 W16750 Appleton Ave (right by Harvey Moys).  Our speakers will be Barb Watters, talking about the success of the fall beer garden on the 4 corners and plans for continuing that into next year and also other new and exciting upcoming events in the Falls!   And then Caitlyn Kison, the owner of Marigold Marketplace will also speak briefly on her store/meeting room and her involvement with the beer garden also.  Afterward, we’ll continue the socializing right around the corner at the American Legion hall.

Hope to see you all there for our first attempt at this!

After much discussion regarding the night meetings at the last Board Meeting it was decided that because the survey showed the majority of membership was strongly in favor of night meetings, they have already been approved by the board for the year, and there is a Night Meeting Speakers Sub-Committee, they will continue and it will be re-visited at the May 2018 board meeting.

At that time an announcement will be made to the entire club, that anyone from the club is invited to share their opinions about the night meetings.  All members opinions will be taken into consideration and the board will make a determination for the next year based on that board meetings findings.

With that being said I would like to thank Carol Schulteis and John Yusko for stepping up to continue scheduling the speakers and locations for the monthly night meetings, as a sub committee of, and in cooperation with, the current speakers committee.

We are looking forward to another year of great speakers, great locations, fun & fellowship POST meeting and most importantly PARTICIPATION!!!  Not only in attendance but in volunteerism!!

It’s the hope of this club and committee that by offering an evening option more members will be more engaged and aware of the great things this club does for the kids, all the fundraisers and events, and be inspired to be generous with their time and volunteer for the “events” they may not have otherwise been aware of.

Like any club, we are always in need of new people to step up and chair events, even come up with some NEW ONES!! So it’s our hope that the efforts put forth in bringing you the night meetings, that were so overwhelmingly desired, will facilitate that! Not ready to chair an event?  Grab a fellow Optimist and co-chair!! Co-chairs accepted!

President Don Gorzek led the Board meeting on Tuesday, September 19, 2017. Meeting synopsis is as follows:

The Board meets the third Tuesday of every month at 7:00 a.m. Members include:

On a beautiful September evening at the MFHS Soccer Stadium, we had a record 85 kids compete in 90 minutes!  It was a unique experience for the kids, under the lights, music playing from the press box while they competed for trophies on the Varsity Pitch.

The support, equipment and promos we got from MFHS Head Coach Scott Stein and his Milwaukee Kicker coaches was outstanding, we couldn’t do this without their support.  Kudos to MFHS Softball Head Coach Lou Sanicola for use of the radar gun.

Co-chair Ben Luczak and volunteers Del Kreuser, Greg Mattson, Beth Saunders, Jeanine Dederich, Todd Paulus, Kim Wenzel, Cathy Sharkey, Steve Fleming and Lynette and Dan Shepherd were enthusiastic and very supportive of all the kids. An “Attaboy” goes to Tom Ciskoski who, after everything was put away, the lights were turned off and the gates and press box were locked, Tom volunteered to stick around until the last kid was picked up by some very late parents.

The trophies will be presented at the October 25 morning meeting by former MFHS and current UWM D-1 soccer players Anna Smalley and Jen Eberhardy, who are also scheduled to speak that day.  All in all, it was a great experience for everyone involved.

Dr. Patricia Fagan Greco, Superintendent of Schools, for the School District of Menomonee Falls, and Optimist Club member talked about the “State of the Schools” at the our Club’s September 13, 2017 meeting. 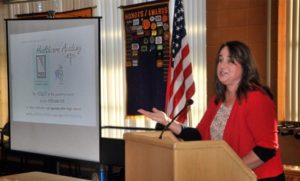 Jennifer Tarcin of the MFHS Healthcare Academy spoke at our September 6, 2017 meeting. 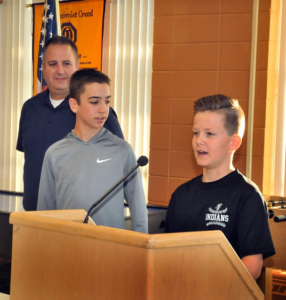 Also at our August 30, 2017 meeting the “Junior Indians Baseball Team”, reported on their Cooperstown Trip, sponsored in part by the Optimist Club. 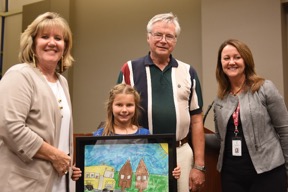 The Menomonee Falls Board of Education honored Larry Podolske with the Friend of Education Award. In addition to the work Larry does for Optimist Club, he also has been on the Community Education & Recreation Commission since 1996 and has been involved in a variety of baseball programs in the community. Congratulations to Larry on receiving this award.

The Junior Optimist Club had their first meeting in early September, and we had a great turn out.  It seems like this year we will have the biggest group of members so far!  This month we volunteered at the “Run with Wolfes” race, which benefits brain cancer research.  It was fun to cheer on the runners and help at the various stations.  We are looking forward to a year filled with service-oriented and social events!

I would like to introduce myself to you.  My name is Kim Wenzel and I am your Public Relations (PR) Chairperson.  If you have an event that you would like information to get out to the community I am your person.  I am able to get the information to the newspapers and onto the FaceBook page for the Club.  The earlier you can get me the information the better, this way I am able to do what needs to be done and meet deadlines for the papers.  Please get me the information in the form of an e-mail, phone call, handwritten note, flyer, and etcetera.  I can be reached at 414-510-3469 and emailed at kfwenzel87@gmail.com.  I look forward to working with all of you.

Via a certified letter, we have severed ties with a third party, SRO EVENTS, a fundraising group who has annually solicited donations for the Magic Show.

It’s possible they might still be calling asking for donations using our Club’s name.  If you know of anyone who gets a request from SRO EVENTS, please notify me asap (262-352-2571) with the date and approximate time of the call.

Please ask your contact if they used either the Magic Show or Menomonee Falls Optimist Club in their request.  SRO EVENTS does solicit funds for other groups so we have to be sure of the nature of their request.

Thanks for your help.
Jerry Mislang

Courtesy of the 40 Year History Program

Articles for the October newsletter are due October 29. Please email your articles to Jerry Mislang.