Menomonee Falls Optimist Club
—- Meeting schedule —-
All meetings are at 7:15 am at the Community Center except as noted.

The 2016-17 Optimist Club year is starting to shape up as an exciting year for all of our Club members. The evening meeting committee has planned out some very interesting events and locations for our group. This will be a trial plan for a year. The goal is to afford members who cannot attend the morning meetings a chance to be more involved. I would like to thank the evening committee members Lynette Shepherd, Jan Barbera, and Jeanine Dederich for all their time and efforts.

A goal that I have for the coming year is to get newer members involved with one of the nearly forty committees that we have. Working with Club members that you may not know will help bond our group. Many of those in committee leadership have been working those roles for years. They have expressed a desire to train others to take over their duties. They would like to be involved with different activities in our Optimist Club that they may not have had time for.

Being involved with the Optimist Club can be refreshing and rewarding. I hope to see and talk with you at a future Club meeting or event.

Mark your calendars now for an evening Optimist meeting on the first Wednesday of the month, pending no other evening events occur for that month.   See the web site for the list of night meetings.

On Wednesday, October 5 our meeting was held at the Old Falls Village.  They graciously welcomed 40 Optimist members, 19 of whom do not typically attend a morning meeting.  A tour of Old Falls Village was provided and the Optimists were thanked for their generous donation to their “Halloween Family Fun Night”.  Several members gathered at Mr. Brews Taphouse after the meeting for “buy your own” treats and beverages.

Join us on Wednesday, November 2 in the Menomonee Falls High School library at 6:30 p.m. Our normal business meeting will be led by President Don and guest speakers will be Bob Vitale, new high school principal, and the FBLA students.  This will be followed by a tour of the high school, including the new weight room which our club has generously supported.  You won’t want to miss all of the exciting things happening at the high school!  You are welcome to continue the evening at DJs Goalpost and socialize with fellow Optimists!

Welcome to the best club in Menomonee Falls!!

We would like to extend a congratulations to new member Jerry Behrens for the Rookie of the Year Award for going above and beyond with volunteer efforts even before he became an “official” Optimist!!

Thank you to all Optimists who joined us at the Three Cellars Wine Store for our Membership Drive Meeting in June!!  Especially to the committee heads who came to talk about their events!!  It was a great turn out and resulted in a few new members!!

We will be having a New Member Reception in November for them & their sponsors to educate them on all the wonderful events and fundraisers they can participate in to Bring Out the Best in Kids and get to know our other wonderful members. Current membership is 209.

The Optimist Club “Leaf Raking for Seniors” event will take place on Saturday, November 12th this year.  Youth Groups from the community will once again gather together this fall to rake leaves for our Menomonee Falls seniors.  Homeowner donations are matched by the Optimists and are given back to the volunteers for youth programs.  If you know someone that would like their yard raked, have them contact the Community Center at 255-8460 to sign up.

The Magic show will be held on Saturday November 12 at 11 AM at Menomonee Falls Middle School Auditorium. This event is free for any optimist and their children or grandchildren. Christin Trist is a renowned Magician with his own Show Palace in Lake Geneva.

The 6th Annual Parent Holiday Drop & Shop will be held on Saturday, December 3rd.  There will be a Pre Event Instructional/Informational Meeting on Wednesday, November 9th to begin promptly at 6:30 pm. This meeting will be held at the American Legion Post #382 in the basement bar.  The American Legion post is located on Main St and Church St (next to Hanson’s Soft Water, Pete’s Headliners and across the street from Nino’s Bakery).  If you are interested in helping out, please contact Dawn Mariscal at dmariscal@wi.rr.com or phone/text to 262-442-4952.  If you are not able to attend this meeting but are still interested in helping out, please let Dawn know and a meeting recap will be emailed out to you.

Save the date for a great Christmas party!  Wednesday, December 7th, at North Hills Country Club.  Watch for more info and a sign-up sheet to be coming around soon!

The Grand Prize winner was Dave Hintze of Menomonee Falls who chose the Seahawk-Green Bay game on Dec. 11 for his trip.  Optimist members Kay Weber and Larry Podolske took home the $1,000 and $600 second and third place prizes.  Other club members in the money at $250 each were Dan Knodl, Gerilyn Yanke, Greg Mattson, Joe Ludan and Scott Stein.  Another Optimist, Dan Stadler, won a free entry to next year’s event.  Jeff Heim of the Falls copped the $400 fourth place prize.  Other $250 winners were Tim Kelley, Jean Badzio, Bill Burki, Rita Stelpflug, Mike Lynch and Roger Hucki, all of MF and Kirk Woosencraft of Milwaukee and Patricia Uttke of Oak Creek.

A smaller than normal turnout at Village Bowl for the Sept. 12 tailgate party never-the-less took advantage of a more spacious table arrangement and contributed freely to the in-house raffle and the selling of Packer tickets donated by Ted Klumb.

Special thanks go to many people including….

Matt Hakes’ VFI firm covered the cost of the winners’ tailgate party to be held at Lambeau Field.  Dan Schwind and Town Bank donated funds to pay for the food and drinks on the winners’ limo trip to Green Bay.  Barry Landowski’s Minute Man Press printed the flyers at no cost to the club.  Rog Rogers’ State Farm Insurance and Terry Marcou/Schmidt Bartelt Funeral Services paid for the printing of the tickets.

Finally, without the tireless efforts of co-chair Dan Schwind who coordinated advance ticket sales and who took control while I went to Canada fishing, this huge undertaking would never have been the success that it was.

As per usual, suggestions for improving next year’s event can be voiced to any of the captains listed above.

This year’s Football Craze Raffle was a success due to club participation and Jan Barbera.  We’ve always increased our ticket sales each year, but with Jan as Co-Chair we doubled what we did last year and sold 1000 tickets.  This is not an easy task when trying to keep everything organized matching money and ticket sales (like herding stray cats). The club raised $12,800.00.

The Junior Optimist Club is happy to be back to school and back to building up membership.  We participated in the high school’s co-curricular fair and are happy about the number of interested students we were able to talk to.  So far this year we have had the opportunity to volunteer at the “Run with Wolfes” race benefiting brain cancer research and at the MFHS Band’s Recycling Drive.  We also had a pizza social at our meeting a few weeks ago as we collected membership dues and forms.  We are looking forward to being a part of the Optimist Club organized leaf raking event in November! 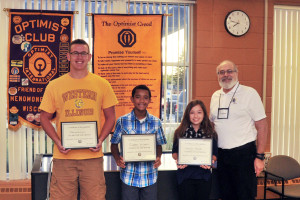