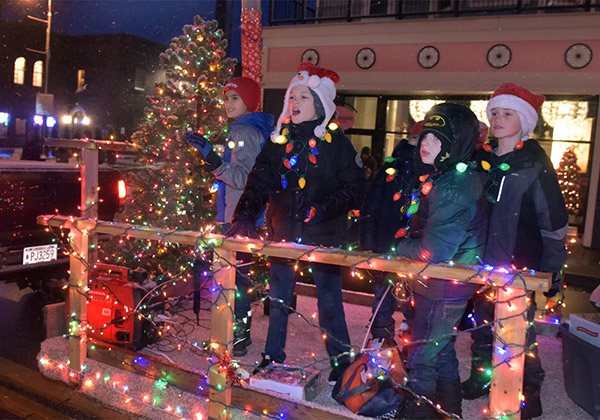 On the advice of the Village of Menomonee Falls, the Parade Committee cancelled the 2021 Menomonee Falls Christmas Parade scheduled for 4:30 pm on Sunday, November 28, 2021. Thank you for your understanding and respect for those affected by the horrific event which occurred in Waukesha. Please keep the community in your thoughts or prayers.

The Optimist Club kicked off the Christmas Season with the annual Christmas Parade on December 1st, 2019. We had snow, plenty of kids and a procession of lights and music down Main Street to the Four Corners, down Appleton Ave to Arthur. Over 60 groups participated including local officials, merchants, scouts, dance teams and Santa.  With the weather being a little challenging the turnout was good and local establishments took advantage of the festivities.

Staging is a unique way to see the parade.  Getting all the groups and kids to their correct spot is challenging, but the group did it safe and sound.  We had Ann Freudenthal, Corrine Reiter, Marcia Hebbring, Jenny OKeefe, Andy Andy and Gary Pollpeter escorting the kids at the drop off area, with Joe Reiter, Scott Drier and Tom the Police Aide directing them into the drop off area, Del Krueser, Ron Hebbring 2 and 3, Lance Newman, Corey Kleeba, Fred Blank, Greg Mattson, Brad Bence and Dan Hart making sure each staging road was in order.  We are fortunate to see the parade groups before anyone else does and seeing the excitement on the faces of all the kids.

The Parade is financially supported by the Village of MF, MF Parade Committee, MF Optimist Club, KC’s and Advertisers that participate in the parade. Special thanks to the Knights of Columbus for supplying transportation for Santa. Thank you All for your help and contributions. See you next year. The Sunday after Thanksgiving, with set-up at 3:00 and groups moving at 4:30.