I want to thank all of you for your support this past year.  I was a tremendous experience serving as your President and I couldn’t have done it without you.

I have people ask me what the Optimist Club is all about and I tell them “we raise lots of money, we give it away to worthy groups and programs and we try to have fun doing it!”  We truly are the Friend of Youth in the Greater Menomonee Falls area.

This year we donated almost $57,000 to groups that requested support for their programs.   We also spent over $16,000 on Optimist programs that we sponsor, which totaled over $73,000 the past year.

Special thanks to all the event and committee chairmen; you truly are the backbone of this club.  Volunteering is a pleasure when we have leaders like you.

I want to close by asking for your continued support and dedication to our club this upcoming year. Good luck to new President Ted Klumb, please support him any way you can.

Thanks again for the “Adventure of a Lifetime”.

The Executive Board meets on the third Tuesday of the month and please remember that Board meetings are open to all club members.

The past two meetings we had four requests for funds and all were approved.  We approved a request from Boy Scout Troop 109 for $500 to help offset the cost of a new trailer.  The Menomonee Falls Dolphinettes asked for $1,500 for dry land fitness training equipment and that was also approved.  Teen Court needed $250 because some of their funding has been cut and that also passed.   We approved $1,000 for the Dash for Dylan.

All told, we donated $3,250 at the past two meetings. We needed to fill Lynette Shepherd’s on the Board and Tom Dewerth was nominated and elected for a one year term.  We agreed to put a cap of roughly $500 on the cost of night meetings.  We discussed having a corn roast booth at Falls Fest next year and I said I would talk to Jeff Steliga and report back at the next meeting.  We also approved budget requests for Leaf Raking, Holiday Drop and Shop and Tri-star Soccer.

I want to thank departing Executive Board members Fred Rambert, Kirsten Sperl and Dawn Mariscal, Treasurer Marcia Hebbring and Past President Don Eisenhauer.  It was a pleasure working with all of you and we accomplished a lot together.

There’s a chill in the air and the leaves are starting to fall.  That can only mean “Leaf Raking for Seniors” is just around the corner!  The event this year will be held on Saturday, November 7th and we’ll be meeting at the Community Center bright and early at 8am.  Like last year, we’ve got several Menomonee Falls youth groups ready for the challenge, including the Falls Angels, Jr. Indians, Jr. Optimists, Cub Scout Pack 109, National Honor Society and Student Council.  We expect to have about 200 volunteers in total out there raking leaves for our seniors.

We need 4-5 captains and a few to volunteers to get everyone checked in that morning.  Sign up at the next few meetings or email Matt Goihl at mattgoihl@sattell.com. Grab your rakes and leaf blowers and we’ll see you there!

We had a great turnout for our first Tri-star soccer competition.  78 kids participated in four divisions for both boys and girls, U6 through U12. Thanks to volunteers Del Kreuser, Greg Mattson, Ann Freudenthal, Tom Ciskoski, Wendysue Fluegge, Collin Fluegge, Bill Hathaway, Carrie Wolter, Todd Paulus and his daughter for scoring and registration.  Special thanks to co-chairs Joe Ludan, Suzy Thomas and Ben Luczak for their support along with Scott Stein for promoting the heck out of this event.  Can’t wait for next year, it should be bigger and better! 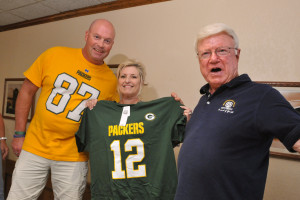 Melanie Lubelski was the Grand Prize Winner of the Nineteenth Annual Luxury Packer Raffle. Lubelski prize included eight tickets to see the Packer at her choice of one of the eight games played at Lambeau Field, a round trip luxury limo ride with food and refreshments en route, a “Tailgate Party” at Bart Starr Plaza, Packer apparel, and $1,000 cash. Lubelski was presented a Packer jersey by raffle committee members Dan Schwind (L) and Ed Schlumpf. Photo by Don Gorzek

Donors of In-House Raffle prizes:  Malkins Flooring, Joe Ludan and Broadway Limo and Coach Services, the Milwaukee Admirals and Don Galle and Kindy Optical.  Also thanks to member Ted Klumb who donated Packer tickets to be auctioned off on behalf of First Weber Realtors.

Matt Hakes’ VFI firm covered the cost of the winners’ tailgate party to be held at Lambeau Field.  Dan Schwind and Town Bank donated $100 to reward the winning ticket sellers.  Barry Landowski’s Minute Man Press printed the flyers at no cost to the club.   Rog Rogers’ State Farm Insurance and Terry Marcou/Schmidt-Bartelt Funeral Home paid for the printing of the tickets.

Finally, without the tireless efforts of co-chair Dan Schwind who coordinated advance ticket sales, this huge undertaking would never have been the success that it was.

As always, suggestions for improving next year’s event can be made to any of the captains listed above.

The installation of new officers of The Optimist Club of Menomonee Falls for 2015-16 took place on September 30, 2015. Ted Klumb took the oath as new President for the year. Over eighty people attended the installation dinner that was held at The Main Mill Restaurant located in downtown Menomonee Falls. Special music for the event was provided by Optimist Club member Wendysue Fluegge. 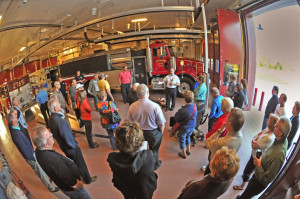 rst Menomonee Falls Optimist Club meeting for the 2015-16 year was held at the new MFFD Fire Station Number One. New Club President, Ted Klumb, called the meeting to order before turning the meeting over to Jim Mollet, Assistant Fire Chief, for a tour of the Station. About forty Club members attended on October 7, 2015. The new Station replaces the original Station One, that was located on Appleton Avenue need Main Street. The new site is at the corner of Main Street and Menomonee Avenue. Photo by Don Gorzek

Distinguished Young Woman of Menomonee Falls, Ritika Punathil, gave a presentation on the DYW Be Your Best Self program for Interfaith volunteers on October 12, 2015.