March is a month that I look forward to. This is because it indicates the approach of spring. More importantly, March 2nd has been a tradition for decades at our home of having “Green Eggs and Ham” for breakfast. This tradition is to honor Theodor Seuss (Dr. Seuss) Geisel’s birthday as well as my “Number One Son’s” birthday. I also find that our Club members, Dick Woosencraft, Jaspal Arora, and Maribel Luehring were born on March 2nd. I wish a happy birthday to one and all.

Here is a thought that I found in the book “The Happiness Project for Mothers” by Gretchen Rubin.

“I don’t check my e-mail or talk on the phone when I’m traveling from one place to another, whether by foot, bus, subway, or taxi. I’ve realized that many of my most important ideas have come to me during these times.”

As spring approaches let us all check the over thirty committees and events that our Club members can become involved with in order to fulfill our mission to “Bring out the Best in Kids”.

“Unless someone like you cares a whole awful lot, nothing is going to get better. It’s not.” – Dr. Seuss

All the Best to You,
Don Gorzek, Optimist Club of Menomonee Falls President 2016-17

President Don Gorzek led the Board meeting on Tuesday, February 21, 2017. Meeting synopsis is as follows:

The Board meets the third Tuesday of every month at 7:00a.m.

On behalf of the Membership Committee I would like to welcome Jon Cline (sponsored by Jerry Mislang) and James Lowe (sponsored by Larry Barbera) to the Optimist Club!!

You are now official members of the “best club in Menomonee Falls” and will get as much out of your membership, as you put in!! The more you participate, the more you will appreciate all this club does to “Bring Out the Best in Kids”.

We look forward to seeing you at the meetings!!

WHAT: This is your chance to hear from another group in Menomonee Falls about their program and support of the village. Followed by a tour of the WAC, pickle ball and drink specials at the WAC lounge.

–Do the Right Thing–

An Optimist Club favorite is coming up in March. Students who will receive the John Weaver “Do the Right Thing” award will be recognized at meetings on March 22 and March 29. This program is always warmly received by club members, as students of great character are recognized. Please plan to attend these meetings.

Contestants at all levels of Distinguished Young Women are judged on scholastics, interview, talent, self- expression and physical fitness. The Optimist Club awards $3650 in scholarships and cash awards to the participants. The winner will go on to represent Menomonee Falls at the state program in August.

Please come out to North on March 11th to support these very talented young ladies.

The annual Oratorical Contest scheduled for Wednesday, March 22 from 5 pm until approximately 9 pm.  We are in need of one more judge for the contest.

Applications and information regarding the essay requirement may be found on the school website at www.mfhs.sdmf.schoolfusion.us starting February 24, 2017. Click on Student Services on the left tool bar, then Scholarships in the drop down, then the Local Scholarship Link. Make sure to print the special forms for the Optimist Club which have their own links.

Completed applications and supporting documentation must be returned to the MFHS auditorium by 3pm on Tuesday, March 28, 2017. For more information about the scholarships, please call Cathy Hazzard at 414-350- 4749.

The Optimist Club of Menomonee Falls will host the 2017 Kids Catch and Release Fishing Derby on Saturday May 13th, 2017 at the Mill Pond in downtown Menomonee Falls. The contest is free and is open to all boys and girls age three through 16 that reside or attend school in the Menomonee Falls area. All participants will receive a t-shirt and a chance to win a door prize. Trophies will be awarded to boys and girls in five age divisions for the longest fish and most fish caught during the contest.

Registration for the event will be from 9:00 am to 10:00 am at the Mill Pond Shelter. The fishing contest will be from 10:00 am to Noon followed immediately by the presentation of trophies and door prizes. Bring your own fishing equipment. A limited supply of bait will be provided. Children under nine years old must be accompanied by an adult. 16 year olds must have a fishing license. Food will be sold during the event by the Menomonee Falls Neighborhood Watch.

Volunteers from previous years will be contacted for the event this year. If you have not volunteered in the past but would like to, please contact Tom Walkner at twalkner@wi.rr.com or Tim Newman at tntnewman@hotmail.com. Tom is also looking for someone to take his place as co-chair for the event next year.

Note: Because of a major construction project in the area parking may be restricted or limited. Please plan accordingly.

Murphy sustained fifteen gunshot wounds trying to apprehend a gunman during the attack at the Sikh Temple shooting in 2012. While describing the events of that day, he took note of our Optimist Creed banner. Murphy told our group that many of the Creed concepts helped him survive awhile he downed on the parking lot with fifteen bullets in his body.

Becca Murray shared her inspirational story as a basketball champion and Paralympian at the Optimist Club February 8 meeting. Becca was born with Spina Bifida, but has not let that stop her from excelling. She has won multiple gold medals at international competitions. In last year’s gold medal game, she scored 33 of her team’s 62 points and was named Most Valuable Player.

The Red, White, & Blue Top that Becca Murray was wearing during her presentation was part of her opening ceremony uniform that was worn at the “Rio 2016 Paralympic Games”.

Murray is holding the gold metal that she won at the Rio 2016 Games. Becca shook the metal so Optimist club members could hear the sound that the beads made. Becca told us that the gold, silver, bronze metals each made different sounds for the benefit of blind metal winners. 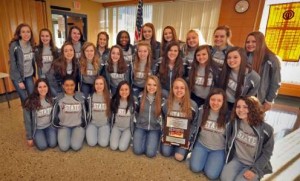 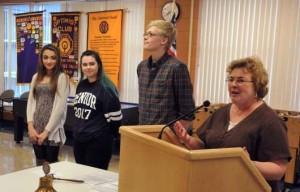 At our February 22, 2017 meeting, Diane Gariepy, Lead Instructor of the Menomonee Falls School District’s “Quest” program introduce her outstanding seniors for the year. The students from the left are Carly Carini, Michelle Williams, and Perry Malila.

The Menomonee Falls High School State Bound Wrestling team members were introduced at the Club’s February 22 meeting. The team was introduced by head coach Jim McMahon (far left), and assistant coach Andy Rutke (next to him). 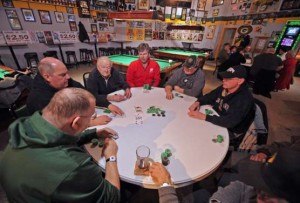 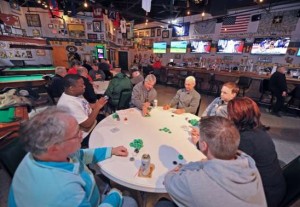 The Poker tournament was held on January 29. The write-up was in the February newsletter.

This month the Junior Optimist Club sponsored its annual food drive, The Souper Bowl of Caring. Each class at the high school received two boxes—one for the Patriots and one for the Falcons—and whichever class had the most donated food items in the winning team’s box (the Patriots) earned a prize sponsored by our club. We ended up rewarding both winning classrooms since the Falcons’ loss was so close! Through this event we were able to donate over 200 food items to the Menomonee Falls Food Pantry.

In addition, our club is continuing to tutor each week at Ben Franklin Elementary and volunteer at Kids Inc. after school.  We love getting to help the younger students!

March 11, 1987 – The general membership decides to do away with the policy of giving bottles of liquor to members on their birthday. That and smoking at meetings is deemed to be a poor example when youth are in attendance.

The club received a thank you note from the following:

Articles for the April newsletter are due March 28. Please email your articles to Jerry Mislang. jerry.mislang@prodigy.net