In case you didn’t notice immediately, this Newsletter is a combined January/February issue. A confluence of factors delayed the release of the January issue, so we’ll combine these two and then move forward on a regular schedule for March. Speaking of regular schedules, I thought it would be beneficial to provide a schedule of deadlines for newsletter submissions. Generally, you should get your article/other material to me by the Saturday prior to the first Wednesday of a month. For the rest of 2016, those deadlines are as follows:

I believe members should have the Newsletter prior to the first Wednesday of each month. Following this schedule will allow me to meet that objective. Lastly, just a reminder to send your newsletter submission to my e-mail address, which is fostjjf7@att.net. Thanks!

The 52nd Annual Distinguished Young Women (DYW) of Menomonee Falls program will be held on Saturday, March 19, 2016 at the North Middle School Auditorium. Routine rehearsals have already begun for the 23 junior girls who are participating this year. The girls will be learning fitness and self-expression routines, practicing interview skills and sharing their talent with local nursing home residents. We have some fun events planned for girls and their Little Misses.

Contestants at all levels of Distinguished Young Women are judged on scholastics, interview, talent, self-expression and physical fitness.  The winner of the Menomonee Falls program will advance to the state competition which will be held August 6, 2016 in Franklin, WI. The Optimist Club of Menomonee Falls awards $3750 in scholarships and cash awards to participants.

We are in need of volunteers to act as judges for practice interviews for the contestants. Those interviews are scheduled for Tuesday, February 16th and Thursday, February 18th from 5-8 p.m. and Saturday, February 13th from 10-11a.m. We are looking for 5 judges for each session. If you can help, please contact Cathy Sharkey at csharkey224@yahoo.com. This is a great opportunity to meet some outstanding young women and help them prepare not only for DYW but for their future as well.

*The program year is the year the Class of 2017 will compete at the national program. 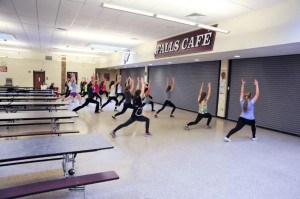 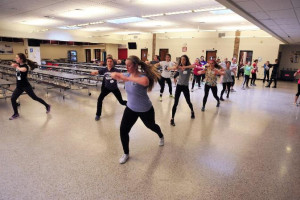 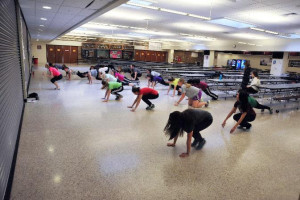 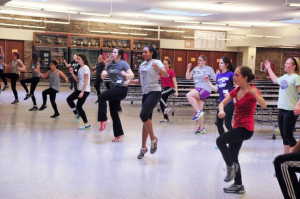 Once again this spring, I will be reporting from Arizona regarding the six or seven Brewer spring training games that Mary and I will be attending. If you are interested in receiving these reports by e-mail, please email me at schlumpfed@yahoo.com and I will add you to the list. If you have been receiving these in the past, and want to continue, there is no need to notify me unless your e-mail address has changed since last spring.
If you are a past recipient of these reports but no longer want to receive them, please let me know and I will remove you from the e-mail list. Go Brewers!

Optimist volunteers are needed for the annual Oratorical Contest scheduled for Wednesday, February 24th from 5 pm until approximately 9 pm.  We are in need of greeters, registration, time keepers, room monitors, score keepers, and the elite job of judges.   We are hoping for a large turn out this year and can use as much help as we can get.  If you are interested in being part of this great event please contact Dawn Mariscal by either email at dmariscal@wi.rr.com or phone/text (262)442-4952.

The trivia contest was held on Saturday January 30th at St. Agnes parish in Butler, WI. Twenty five (25) teams entered the contest, vying for the coveted thinking man’s trophy and bragging rights. We are getting close to a maximum number of teams due to space availability. The committee of Sue Jeskewitz, Karen Nelson, and Todd Paulus worked tirelessly on questions that turned out to be much harder than thought.

Three teams commandeered their ships thru the 100 questions to tie for the top score of 59 correct. Positively Plaid won the tie breaker of guessing closest to how many they would get correct before the contest started. For their effort, they get to keep the coveted traveling trophy for a year, and have an open invitation to come back next year and defend their crown.

The committee will look into making the questions easier, but there are no guarantees.  We thought we nailed it this year.  Many thanks to everyone that put together teams to make our event a success.  Without the teams and players, the event does not take place.  As one of the contestants said to me the next day – “Each table was a party in and of itself”.  Thanks also goes out to all teams that came up with a table theme and encouraged team members to be a part of it.  Team Avant Gard won the award for “Best Table Theme”.

This event was initially started as a social event for the club by “Jess”.  It has turned into a social fundraiser as the event netted the club $4,609 in profit.  Thanks to the following workers, besides the committee, that helped make the event a success – Sarah France, Robin Price, Jean Christian, Robyn Turtenwald, Jim Christian, Paul Nelson, Jan Barbera, Marcia Hebbring, Greg Mattson, Larry Hebbring, Larry Barbera, and Moira Paulus.  Special thanks to Harry Stoetzel for the use of his sound and video equipment for the event.  We hope everyone had a great time and look forward to seeing you next year.

More Menomonee Falls School Kids Sharing Their Talent With Us… 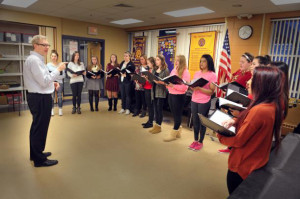 Club members were treated to a performance by The “Master Singers Choir” from Menomonee Falls High School at the December 16, 2015 Wednesday morning meeting of the MF Optimist Club. The singers for the Masters are selected by audition and represent the best singing voices at the high school. (Photo by Don Gorzek.)

Catching Up on Our Student of The Month Honorees… 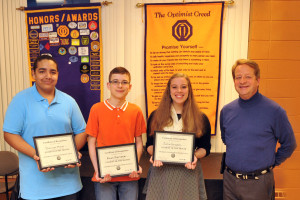 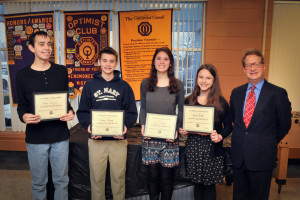 Another great year for the Optimist Club chili dinner. The weather was fantastic, which allowed the diners to come and enjoy a good bowl of chili.  This year we sold 653 advanced chili dinner tickets and another 212 tickets at the door for a record 865 total tickets bought, sold and donated.  We again had a profitable 50/50 raffle – thanks to Greg Mattson,  John Feltman, and Tom Ciskoski, we raised $438. We also had several donations this year which helped keep our expenses to a minimum.  After all was tallied we raised $5185.69 for the club. On behalf of the Chili Dinner committee I would like to thank everyone who donated their time,  talent and money to make this such a great event.  Thanks to everyone who made the chili, served the chili, made the kitchen run smoothly, and helped clean up.

Donations were given by: Piggly Wiggly, Pick ‘n Save,
Wal-Mart, Nino ‘ s Bakery, Ram Construction, and Schmit Farm Produce. In addition, an anonymous donor provided us with 60 pounds of ground beef. Thanks to all these donors as well.

Something for Your Calendars…

April 29th is Optimist Club Night at Falls Patio Players’ production of My Fair Lady.  Great seats have been reserved for members.  Look for more details in next month’s newsletter. 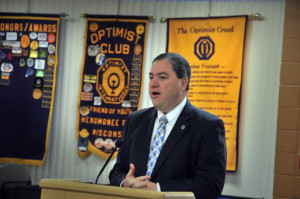 The Optimist Club of Menomonee Falls hosted Waukesha County Executive Paul Farrow at the January 13, 2016 meeting. He let members know what is happening, or going to happen, in our county. Waukesha is one of the best run counties in the state and remains on a rapid growth rate. (Photo by Don Gorzek.)