“Don’t be just another guy going down the street and going nowhere.” ~ Al McGuire

Our Optimist Club has started 2017 with some entertaining and worthwhile events. Those who attended our many January events, I trust found them to be rewarding.

As Club President, I receive printouts about Club Membership. Some folks indicated that they plan to drop their membership due to “Lack of Interest”. I believe that the problem maybe more a “Lack of Involvement”! One of the “Tenets” of Optimism is “Bring Out the Best in Kids”. I believe that as our members “Get Involved” with youth, through our over thirty committees and activities, they would become excited and certainly not have a “Lack of Interest”.

“Keep it simple, when you get too complex you forget the obvious.” ~ Al McGuire

Check the Club’s Membership Directory, Website, or Facebook Page for the committees and chair-people to contact for activities that spark your interest and join that group. You may be surprised how refreshing and exciting it is to work with and for the kids in our community.

“Help one kid at a time. He’ll maybe go back and help a few more.”  ~ Al McGuire

My compliments to all those folks who helped with the Club’s Chili Dinner Fund Raiser at the MFHS Basketball game on January 13, 2017. The Chili was Great! Or as Al McGuire would put it, “If the waitress has dirty ankles, the chili is good.”

President Don Gorzek led the Board meeting on Tuesday, January 17, 2017.  Meeting synopsis is as follows:

Treasurer’s report: Approved report; also approved $110 membership to Menomonee Falls Chamber of Commerce.  Their events will be posted on our website, Facebook and announced at weekly meetings.  With membership, any Optimist member may attend Chamber events

Budgets:  Approved budgets as submitted for DYW program and Trivia contest; Note to all committee chairs: Please provide budgets for events, past and upcoming.  President Don will follow up with you.

New Business: Lynnette Shepherd will look into scheduling a membership drive in March, not to conflict with morning or night meetings.

Please remember – the board needs a “proposed budget” with last year’s budget, last year’s actual #s and this year’s proposed #s for board approval prior to your event & then a final budget following the event with financial results.

The template for this can be requested from President Don, Lynette Shepherd or Jeanine Dederich.

Thank you for your cooperation!!

Our club is a member of the Menomonee Falls Chamber of Commerce and, as an Optimist member, you share the benefits of being a Chamber Member and can participate in all Chamber events.

WHERE:  Main meeting room at Menomonee Falls Library.  Meeting will be followed by a tour of the police department

WHAT:  We are honored to have Lt. Brian Murphy, formerly of the Oak Creek Police Department, as our guest speaker.  Many of you will remember Officer Murphy as the first responding officer to the Sikh Temple shootings in 2012.  Lt. Murphy sustained multiple gunshot wounds in trying to apprehend the gunman and save the lives of those involved, a significant act of heroism.  His presentation will recount the events of that day as they unfolded.  This is one meeting that will not want to miss.  Library seating will be limited to approximately to 100, so mark your calendars now for this very special event.

Following Lt. Murphy’s remarks, a tour of the MF Police Department is planned for those interested in participating.

Volunteers are needed for our annual Tri-Basketball contest. It will be on Sunday February 26th from 11:00 AM to 3:00 PM, at the Menomonee Falls high gym.  It is run every year in conjunction with the dodgeball tournament. Volunteers are needed to help with sign up and running the individual drills.  The kids always enjoy and appreciate all the things that we do for them.

If you are available or have any questions, please let Bob Wenzel know at; 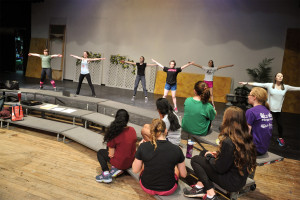 The 53rd Annual Distinguished Young Women of Menomonee Falls Scholarship Program will be held on Saturday, March 11, 2017 at the North Middle School Auditorium at 7:00 p.m. Twelve junior girls will be competing for the title and the opportunity to move on to the state competition. The girls are currently learning fitness routines and working on interview skills. Photos and more information about the contestants will be in the March newsletter.

It takes many volunteers to put on a production like this one. I need help selling tickets and program books in the lobby the night of the show. I also need a few backstage “moms” who can help with zippers, lace-up prom dresses, etc. Please email Cathy Sharkey at csharkey224@yahoo.com if you are able to help.

Optimist volunteers are needed for the annual Oratorical Contest scheduled for Wednesday, March 22 from 5 pm until approximately 9 pm.  We are in need of greeters, registration help, time keepers, room monitors, score keepers, and the elite job of judges. 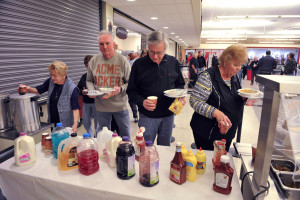 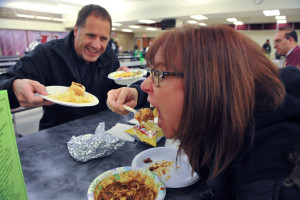 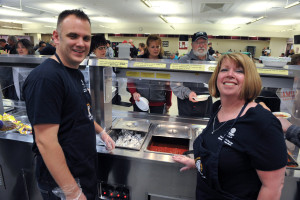 The chili dinner has wrapped up or another successful year. We started on Thursday, after Tom Wagner, Kathy  Matthiessen, Al Matthiessen, and Sue Carney got the kitchen prepped and ready to go. Tom Dewerth, Bob Wenzel and Fred Rambert fried up 120 pounds of hamburger. Then Faith VanderHorst, Luanne  Rambert, Joanne Wanner, Wendysue Fluegge, Lynette Shepherd and Kim Wenzel mixed up 150 gallons of chili, while Larry Podolske, Dick Woosencraft and Al Matthiessen kept the kitchen flowing, picked up and packed up the chili for Friday.

We presold 705 tickets and sold 94 at the door. The club donated 197 tickets to the food pantry and the high school. Ticket sale revenue was $5,192.50. We had donations from Schmitt Farm Produce, Ram Construction, Costco, Pick’N’Save, Piggy Wiggly, Woodmans, and Edward Jones for a total of $640.87 that helped offset the $1701.58 cost of the chili supplies. This year the chili dinner made a profit of $4,419.79 for the club.

Thank you to all that helped make this event a success. We had 37% of the club participate in this event and each contribution is important to our success. 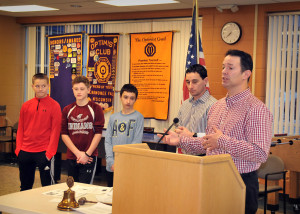 Mark Plantier, President of the Menomonee Falls Junior Indians Baseball Teams, brought several of the Cooperstown National Tournament Team to our Club’s January 18, 2017 meeting. The boys spoke about their experiences at the Baseball Hall of Fame and competing against 150 other teams from across the county. 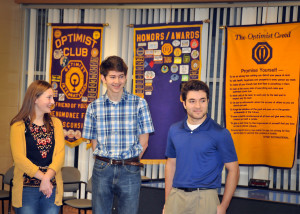 LOTS OF LAUGHTER, AND APPLAUSE and some moaning, was heard at ST. AGNES activity center for the Optimist Trivia Night last night. 21 teams crowded the room with food, drink and wisdom. Some new faces appeared and I hope that they had fun!!! We tried to make the questions easier this year and I think we succeeded in most of the categories, as was evidenced by the scores. 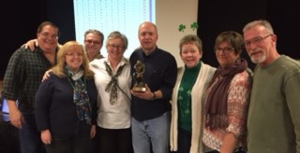 With the combination of all of the games and registration, our profit for the night is around $4000.  This Trivia Night was originally designed as JUST a social event for the Optimist Club members but each year with all the enthusiasm of the participants, we raise money “FOR THE KIDS”.

This night could not be successful without the many volunteers that give their time to organizing, setting up, cleaning up and writing the questions.  Thank you to Karen Nelson, and Todd Paulus, my co -chairs Sarah and Adam France, Pat Heagney, Larry & Marsha Hebbring, Corrine Reiter, Gregg Mattson, Jan Barbara, Nancy Newman, Dan Shepherd, Molly Paulus, Kathy Matthiessen and of course we cannot forget our production volunteer, Harry Stoetzel and his helper, Bob.

We usually schedule “TRIVIA NIGHT” for the last Saturday in January.  Please put it on your 2018 calendar and get your creative juices stirring!!!!

We thank all of you that helped clean up after the event.   We are fortunate to have such a great facility for such a reasonable cost and so we kike to leave it as pristine as possible.

IT WAS A FUN NIGHT AND WE THANK YOU ALL FOR PARTICIPATING!!!!

The Poker tournament was held on January 29 and had 31 players. Winner was Dan Klinger, second place Robert Dawson and third was Dornaj Davis. The winner graciously donated $100 of his winnings back to the club.  I would like to thank the volunteers; Jan Barbera, Lynette Shepherd, Kathryn Hoff, Jerry Mislang, Larry Hebbring and Larry Barbera. A special thanks to Donny & Jenny Matovich for hosting the event and providing lunch to the participants. The event made almost $700 for the club. 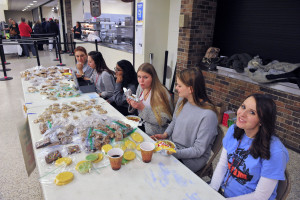 This month the Junior Optimist Club enjoyed hosting its annual bake sale in accordance with the adult Optimist Club’s Chili Dinner at the MFHS basketball game.  It was a great success!  Using the money we’ve raised from previous sales and other fundraisers and with the help from Marcia Hebbring’s Soup fundraiser in December, the Junior Optimist club was able to make a $1000 donation to Blessings in a Backpack.  Certainly this is a deserving organization, and we were all excited to be able to support it.  We look forward to continuing to be able to make donations such as this to other organizations, especially thanks to the continued support of our bake sale customers!

As the month wraps up, our club will host its annual Souper Bowl of Caring event—a competitive food drive at the high school which, in order to win, the class must bring in the most food and also place their food items in the box of the winning Super Bowl team.  The event begins January 24th and will run until the Super Bowl game.  We are looking forward to it! 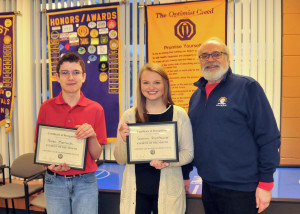 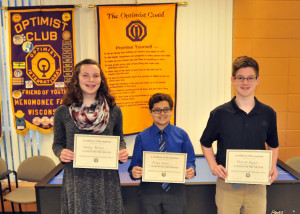 February 1994 – An estimated 600 people downed about 80 gallons of chili at the 3rd Annual Chili Luncheon held at St. Paul’s Church of Christ.

Attention Brewer Fans.  If you’d like a behind-the scenes report of the Brewers’ spring training activity this year, just drop an email to Ed Schlumpf at schlumpfed@yahoo.com.  He attends six or seven games each March in Arizona and has been filing reports with 150+ readers for the past several years. Let him know if you would like to be on his email list.

Articles for the March newsletter are due February 24. Please email your articles to Jerry Mislang at jerry.mislang@prodigy.net