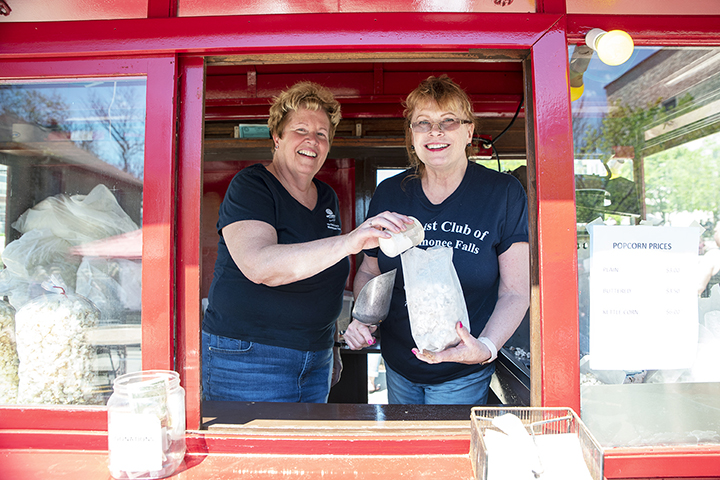 As April 2020 rolled around it is normally time to begin planning for the popcorn wagon for me. This year I thought about it, but aside from consulting with President Todd, did nothing. Then the parade got cancelled and May rolled around. It was time for action. The season would begin a week later as at that time the Governor’s lockdown extended through Memorial Day. So, the season began a week late and since I was short a couple of captains, decided to end it a week earlier as who knew how it would go. The week at the end was added back however given how successful we had been.

Well go it did. Linda Tetting volunteered to captain week #1, and even worked opening night, Sunday, May 31st herself along with husband Bill. They did $312 that night. People were anxious for this normal activity in the midst of virus chaos. Night #2 was Larry Newman and Jon Cline, they did $352. Later that week Fred Blanke & Ann Freudenthal did $310 and Jenn Dedrick and friend did $300. It was an amazing $1848 in the first week. Sales continued throughout the summer well above prior years with some other noteworthy ones being perennial stars Tom Ciskoski & Greg Mattson doing $1500, another big hitter, Carl Trapp and the Sussex group did $1304, Meg Latus, $1282 and the Kernelhimself did $1206.

A few other noteworthy nights from the summer included Ciskoski/Mattson with $536 and$393 (corn roast, a new event), Dawn Mariscal & Jimmy $428, Tom & Kathy Walkner $310(on July 3rd, parade night), Terra & Steve Chmielewski $314 (rookies of the year) and Carl Trapp & company had $297and $255 on the last night of the year by new member Annie Jurczyk, Jenn Dedrick and the Kernel.

The average was $1131/week and the total was $15,840. A week of $850 which used to be routine in recent years wasexceed in all but 3 weeks. Weather played a role in some of the lesser weeks.

There were downsides however. The Memorial Fest was cancelled, usually a $900 event and the high flying “schoolsgroup” led by Jason Hussein and Kirk Woosencraft was slowed by not being able to notify the families this year to avoidbig crowds of eager children. And we lost the first week. But in the end, it was a super year, easily the best by far typicalnightly sales ever.

Next year we look forward to probably finding a new home in the new park (Optimist Park?). If that isn’t ready, we’llreturn where we are. A huge thank you to all the captains that keep things running throughout the summer and all thegreat workers. We didn’t let the Coronavirus bother us at all.