The first thing I would like to say, as President of this amazing club, is that I know that really, I just run the meetings.  It’s the Board, Committee Chairs and the members that run this club!!  And I would like to say THANK YOU in advance for that!!  I’d also like to acknowledge and thank a few specific people!!

“It takes a village to raise a child” ~ Ancient Proverb

I’m so happy every one of you are part of this “village”, the club that really takes that proverb to heart!!

If you are one of our members that doesn’t get an opportunity to come to meetings, I would like to invite you to schedule one in & get an insiders glimpse into everything we do to Bring Out the Best in Kids, & see firsthand, how much fun we have!!  You will want to come back!!  And maybe even volunteer for something!!

Your friend in Optimism,
Lynette

Cailyn Kison, the owner of Marigold Marketplace, has a great opportunity to publicize her business with the Fox 6 morning show and will not be able to participate as planned on November 1st.  Good news for her, not so good for us. But, we are flexible and optimistic!

The new location will be at the Community Center and Barb Watters will still be talking about the success of the Fall beer garden on the 4 Corners, plans for continuing that into next year, and also other new and exciting upcoming events in the Falls!

We’ll start at 6:15 and, afterward, we’ll continue the socializing at the American Legion hall.  Hope to see you all there!

There will be 2 great opportunities for Optimist Club members to see the newly renovated theater at the North Middle School.

The morning meeting on November 29th will be held at the theater.  Be one of the first people to see the renovations. The set for Christmas Carol will be on the stage so you can walk around the London of Dickens time.  Also feel free to tour the backstage area, prop room and costume shop. We will meet at the theater at 7:15 where Falls Patio Players personnel will be on hand to answer questions as you take a tour.  After members and their guests have seen the stage and backstage area, there will be a short business meeting in the theater. Enjoy sitting in the brand new seats.

Opening Night for Christmas Carol is Friday, December 1.  This will be Optimist Club Night at Falls Patio Players.  Great seats have been reserved for Optimist Club members, their families and guests.  Please see Ann Freudenthal to order your tickets. (annfreudenthal@gmail.com or 262-255-1946) Tickets are $10 each for adults and seniors and $8 for students. Tickets for these seats are not available for online sales.

So feel free to bring family members and guests to see the remodeling that has been done on Wednesday morning, November 29. And bring them back to see the show at 7:00 on December 1st.

What a great way to start the Christmas holiday season.

5:15 Caroling with Santa at Linden Grove

This is improv and the show is all about the Optimist Club…no roasting!

Please email any good stories of our club and our members that may be used in the show to Kristy Gruenwald at Kristy-marie@hotmail.com

Just a reminder that you CAN pay your dues online –CLICK HERE   and scroll down to the Pay Membership Dues Online link or you can give a check to Larry Podolske at any meeting.

We can’t imagine that anyone would NOT want to renew their membership with the BEST club in Menomonee Falls, but in the event, that circumstances prevent you from doing so, please let us know.

President Lynette Shepherd led the Board meeting on Tuesday, October 17th, 2017.  Meeting synopsis is as follows:

Larry Podolske discussed funds currently held at Optimist International, including what it is currently earning and how it is readily available if needed.

The Board meets the third Tuesday of every month at 7:00 a.m.  Members include:

Packer Raffle Sets Yet another Record

The achievement was bolstered by the $500 donated by the Kohl’s Corporation which sent eight volunteers to help out at the September Tailgate Party.  This effort was arranged by Optimist member Steve Luehring, along with his wife Maribel, another club member who joined in the volunteer effort that night.

Contrasted to last year when 10 of the 18 prizes went to club members, only three Optimists shared in this year’s winnings.  A Larry Hebbring group, John Yusko and Becky Shull each won $250.  Otherwise, all the other prizes went to non-club members with many of the winners not even living in Menomonee Falls.  In fact, one winner resides in Texas!

The Grand Prize went to Greg Buck of Muskego who chose the Saints-Packer game on Oct. 22 for his trip.  Because of Aaron Rodgers’ injury and the forecasted rain, demand for tickets was down, so Ticket Connections, the broker annually used by the Optimists was able to move Buck and his gang into indoor club seats for the game.

Nearly 50 more people than last year attended the Tailgate Party.  But a check of the records showed that only 93 club members either sold or bought a ticket.  That compares to 130 who did so just two years ago!

In addition to the gift certificate from Village Bowl, other door prizes were donated by Paul Dross Insurance of Merton, Main Street Framing in Lannon and Dennis Steinle.

Matt Hakes’ VFI firm covered the cost of the winners’ tailgate party at Lambeau Field.  Dan Schwind and Town Bank donated funds to pay for the food and drinks on the winners’ limo trip to Green Bay.  Barry Landowski’s Minute Man Press printed the flyers at no cost to the club.  Rog Rogers’ State Farm Insurance and Terry Marcou/Schmidt & Bartelt Funeral Services paid for the printing of the tickets.

Those who helped from Kohl’s in addition the Luehrings were Rochelle Behling, Barb Brooks, Bobby Halliburton, Mike Kampschroer, Sara Goeser and Mike Kruztcki.

A big “thank you” to Brenda Foote, a non-club member who sold 16 tickets again at her Water Street Pub in the Falls.

Finally without the tireless efforts of co-chair Dan Schwind who coordinated advance ticket sales, this huge undertaking would never have been the success that it was.

As per usual, suggestions for improving next year’s event can be voiced to any of the captains listed above. 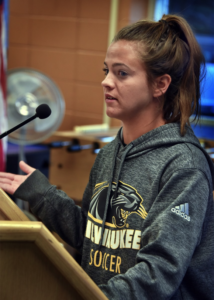 On Wednesday October 25, 2017, we had current UWM soccer captain and MFHS graduate Anna Smalley as our guest speaker. 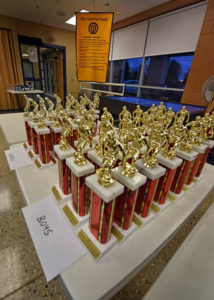 In addition to hearing from Anna, she presented the trophies to this year’s Tri-star Soccer winners. 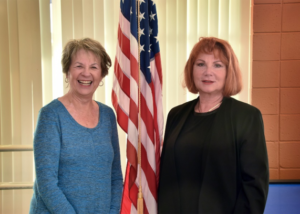 At our October 18, 2017 meeting Rose Schwartz swore Diane Matuszak in as a Lieutenant Governor of the SWIS District Zone 2. 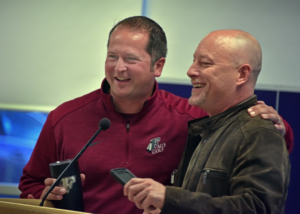 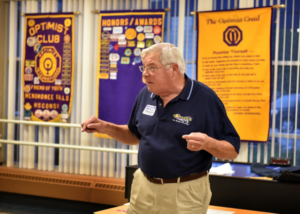 On October 11, 2017, we welcomed Ralph Krueger who talked to us about his traveling bowling program.  This is a program that he has presented to literally hundreds of thousands of school kids. 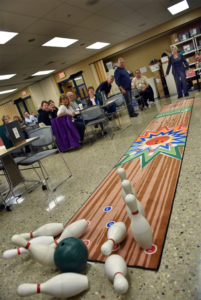 Suzanne Carney demonstrates her skill on the “Bowling in Education” alley. 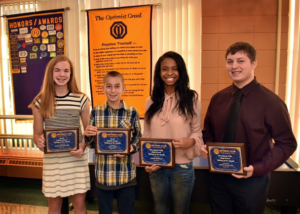 The Menomonee Falls Optimist Club Students of the Month for October 2017 include from left, North Middle School Kate Lockwood and Will Toth, both seventh graders and from MFHS seniors Tamia Powell and Scott Weiland. 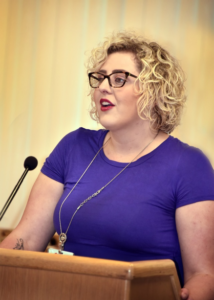 A representative from Costco spoke at the October 4 meeting.

The Junior Optimist Club has built a strong membership base this year.  We’re excited to have ordered our t-shirts and gotten a few meetings under our belts.  We will be participating in the Optimist Club’s annual leaf raking event in a couple weeks and have quite a few members signed up to help.  We are also sending several students to Ben Franklin Elementary each week to work with students one-on-one in a new mentorship program.  It’s fun to see so many of our members getting involved right away this year!

November, 1993 (24 years ago) – Club member Robyn Shirley-Turtenwald is named “Citizen of the Year” by the Menomonee Falls Chamber of Commerce.

There are multiple venues for publishing Optimist news and events the community and to the Optimist members. It is important to get the word out so everyone is aware of the events we sponsor to benefit the youth of the community. Committee chairs are responsible for writing the articles and sending them to the people listed below:

NEWSLETTER – Jerry Mislang via email no later than the 25th of each month – jerry.mislang@prodigy.net

NEWSPAPERS – Kim Wenzel via email three or more weeks prior to your event, as quickly as possible after an event – kfwenzel87@gmail.com