We continue to be blessed with some fun and rewarding meetings. The Speaker’s committee hit a home run with our night meeting with speaker Sandy Sullivan giving us an inside look at the Lombardi era Packers. The presentation was a hit! I understand Sandy sold quite a few of her books.

Do The Right Thing was a huge success and we had a full house last Wed. Tons of parents and family members attended to celebrate the noble actions of their kids.

Thanks to the Oratorical Committee and Dawn we had a lot of participants competing to go to the next level. It was rewarding to see these young people giving their all.

The Trivia Contest was fun, as always, and we almost reached capacity. The word is out that this is a fun event, and a great night out with friends.

We are looking for new Board members to support the club. If you are new to the club and want to get involved, while learning about how your club operates, please give me a call. This is a good place to jump in.

Our next board meeting is Tuesday, March 15th and we will be looking at expanding payment methods for events and exploring new ways of conducting night meetings.

Also, if you have any questions, suggestions, or concerns, I welcome your calls, emails or comments.

This is my Optimist Club. It is composed of people just like me. It will be friendly if I am. It will do great work if I work. It will make generous gifts to many causes if I am generous. It will bring others into its membership if I bring them. Its seats will be filled if I fill them. It will be a club of loyalty and love, of faith and service. It is I who make it what it is. Therefore, with God’s help, I dedicate myself to the task of being all these things I want my club to be.

Contestants at all levels of Distinguished Young Women are judged on scholastics, interview, talent, self-expression and physical fitness. The Optimist Club awards $3650 in scholarships and cash awards to the participants. The winner will go on to represent Menomonee Falls at the state program in August.

The girls will be visiting a nursing home to perform their talent, have a social outing with makeup and skincare lessons with 2012 DYW CeCi Schueber, will be hanging out at a pizza party with their Little Misses and rehearsing over the next few weeks.

Four of the participants are daughters of club members. Those girls are Lauren Baumhardt, daughter of Rob and Lisa Baumhardt, Miranda Fluegge, daughter of Wendysue and Craig Fluegge, Signe Mattson, daughter of Greg and Deborah Mattson, and Sarah Shepherd, daughter of Danny and Lynette Shepherd. Please come out to North on March 19th to support these very talented young ladies.

Applications and information regarding the essay requirement may be found on the school website at www.mfhs.sdmf.schoolfusion.us starting February 16, 2016. Click on Student Services on the left tool bar, then Scholarships in the drop down. Make sure to print the special form for the Optimist Club. Completed applications and supporting documentation must be returned to the MFHS auditorium by 3pm on Tuesday, March 22, 2016. For more information about the scholarships, please call Cathy Hazzard at 414-350-4749.

Broadway Season Is Winding Down…

Optimists and your friends: there are two shows left for this “Broadway Season”. One is a great show, 8 Tony nominations and awards. It has an Irish flavor and very entertaining. WE already have 50 Optimist and friends signed up for Kinky Boots. It is a great evening of entertainment and NOT TO BE MISSED. Call for tickets today. You know the routine and we get the best seats and the best deal. (see flyer included with this newsletter.) 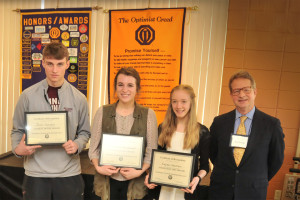 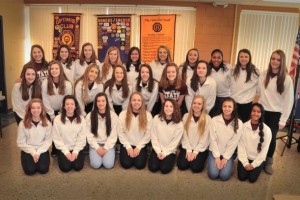 he Menomonee Falls High School Dance Team spoke at the Optimist Club meeting on February 17, 2016. The ladies talked about their excitement competing in two dance categories, kick and jazz, at the state championship in early February. (Photo by Don Gorzek.) 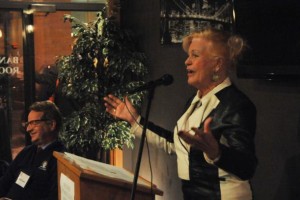 e Falls Optimist Club held a special night meeting at The Main Mill restaurant on March 2, 2016. Sandy Sullivan, author, teacher and motivational speaker, presented to about sixty Club members and guests. Sullivan’s 2004 book “Green Bay Love Stories and Other Affairs,” drew nationwide attention for a steamy memoir that tells of her bedhopping exploits with Green Bay football legends in the years when they had godlike status in the state. She ran for Wisconsin Secretary of State in 2006. Sullivan now lives in Franklin, WI. (Photo by Don Gorzek.)

The Menomonee Falls High School Gymnasium was the site for the annual Menomonee Falls Optimist Club’s “Tri-Star Basketball Contest”, held on Sunday, March 6, 2016. About one hundred boys and girls, ages 6 to 13 competed in the contest. Each participant was evaluated individually within his or her age and gender groups. The children completed in three skills that included; passing, dribbling, and shooting. Award metals will be presented to top competitors in each group at a future Menomonee Falls Optimist Club meeting.