NOTE: We believe this will be the first month in club history that each meeting will have an Optimist Club member as a speaker!

WEDNESDAY JULY 6
LIGHTS! CAMERA! ACTION! It’s that time again, a visit from the Patio Players Kid’s Summer Camp. This is a program that we support with an annual donation and they’re always willing to come in and show us what they’ve accomplished during their summer break.

WEDNESDAY JULY 13
We’re going to get our money’s worth with a baseball doubleheader! In addition to recognizing the Tristar Baseball Trophy Winners, we’ll be hearing from the MFHS State Semifinalist Baseball Team and Head Coach Tim Gotzler. The future and present, all in one meeting!

WEDNESDAY JULY 20
An Optimist International initiative is an annual Respect for Law meeting. Milwaukee County Sheriff Zach Kornburger will be joining us. A MFHS grad currently working at the Milwaukee County Courthouse, Zach was also a member of the two-time MFHS State Baseball Champion’s team.

WEDNESDAY JULY 27
MJ’s Hair Hut, a traveling barbershop, will be making her first trip to the Community Center parking lot. MJ has been featured on FOX6 and as a recovering addict celebrating seven years sober this month and has an interesting background that she’ll share with us. An added bonus: FREE HAIRCUTS for anyone from 8:30 to 10:30am. Anyone needing a cut, whether you’re a member or not, today’s your lucky day!

WWell the nice weather is here and hopefully for a great summer of Optimism. I hope everyone has big plans for the July 4th weekend. If not, hopefully you are going to help the club out for the Parade. We could certainly use your help. June had some good events for the club.

Tri-Star Baseball was a hit at the Little League Park as it always is.

We also held a New Member Social at DJ’s Goalpost and had several new interested guests as well as we swore in some new members that evening. Great event planned by Cathy Sharkey and Michael Russell. With being in the heat of summer the popcorn wagon is off to a great start. With the concerts in the park the wagon and those that are working during those concerts are popping like crazy. Thanks to all that have been working at the wagon,

Other events on the horizon are:

July 3rd Parade If you are interested in volunteering for the Parade contact Steve Fleming. As you know, Ann Freudenthal will be contacting you to help with the Parade.

If you are interested in volunteering for either event, please contact Don Eisenhauer or Steve Fleming. As you know, Ann Freudenthal will be contacting you to help with the Parade.

Welcome Bob Schneider to the club. Bob will be sworn in as a new member on June 29th. Bob is willing to get involved and follow Jerry Mislang’s lead. Somebody warn Bob. Welcome to the club Bob!!

Many of you may not know this but we now have the ability to accept credit cards as a form of payment at the Popcorn Wagon. Please see your captain or Dan to learn how to use the machine.

As I put out in my Monday message, please keep Cathy Hazzard in your prayers as her father John passed away.

Keep Jon Cline and Ed Schlumpf in your prayers as they continue to recover. I understand Ed had surgery and was discharged on Monday June 27th. He will soon be on the road to recovery with Mary making sure he follows doctor’s orders.

Jon is on the mend and hopefully will be back at meetings soon.

Until next month, enjoy the sunshine and warm weather and keep the popcorn popping. 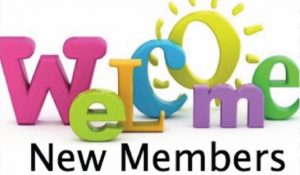 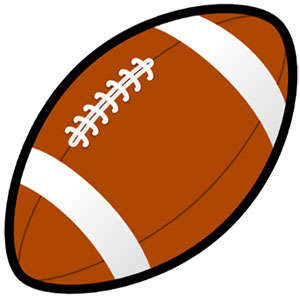 The Club has taken 300 Football Crazr raffle tickets to sell for the SWIS District and our Club.  Anyone interested in purchasing tickets or helping to sell the 300 tickets for the club please contact Larry Hebbring.  Last year we sold 300 tickets and raised over $1600.00 for the club and people who bought our tickets were awarded over $1000.00.  It is a fun way to watch the 17-week football season and an easy sell at $20.00 per ticket.

The 32nd Annual Scholarship Golf Outing netted a profit for our club of $14,271.97. Thank you to all golfers, donors, and volunteers that helped make the event a success. We will see you on the 3rd Wednesday in May 2023! 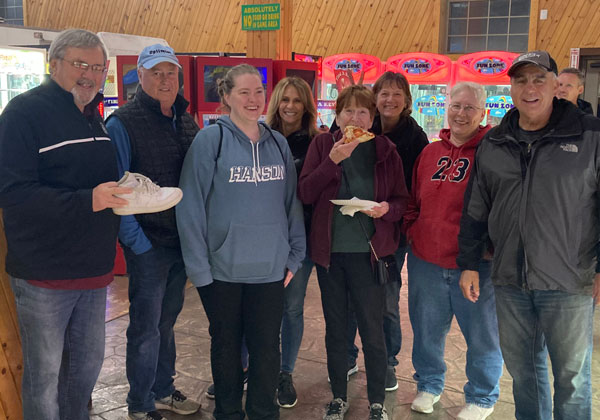 In what’s becoming the rule instead of the exception, we had another outstanding turnout! 295 out of 305 (97%) of the students made the trip from the Prom at Silver Spring Counter Club and had a fun, memorable and most importantly, safe late night / early morning Post Prom at Action Territory in Kenosha. It takes a good team to pull this off though. A sincere thanks to chaperones Larry Hebbring, Cathy Sharkey, Kirsten Sperl, Kathy Matthiessen, Rick Kohl and Kim Wenzel. As retiring MFHS Principal Bob Vitale said, you have to be a little crazy to volunteer for this event, and he’s right! Our Club donated $448 in gift cards and $2,735 to offset the cost of Prom Tickets. Thanks again to everyone involved who has made this night something that our club can be proud of year after year. 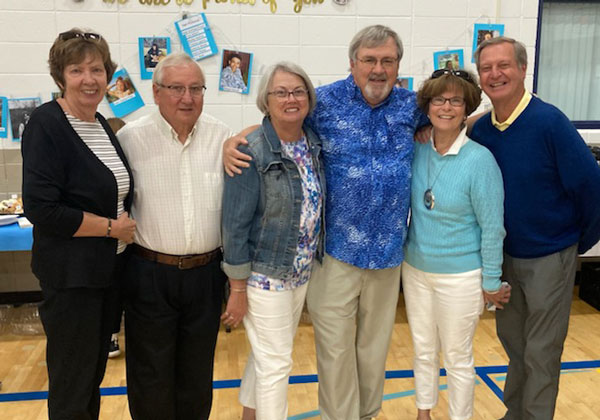 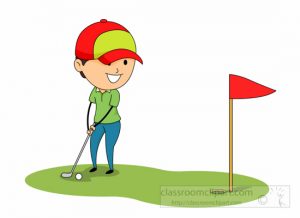 The SWIS District Junior Golf Outing was held on June 11, 2022 at Brown Deer Golf Course. We only had 4 participants for the event but we still decided to host it. We have one golfer shoot a qualifying score, however that golfer opted to not go to FL to participate on the International Golf Outing. Tom Carls and I will re-evaluate the event for next year to see if the event will be held or not.

The Optimist’s after 5 (OA5) group organized and held a meat raffle on Saturday, June 11th , 2022 at DJ’s Goalpost Sports Bar & Grill. This was a wonderful event and we tried a themed basket idea for this raffle and it seemed to be well received. June’s theme was “Bar-b-que” and included baskets with “all the fixings” for Steak, Brats & Burgers, Ribs, Breakfast, Beer can chicken and more. The baskets included sauces, seasonings, condiments, buns, side dishes, cooking vessels, recipes and some fun BBQ themed extras and of course the MEAT! A special thanks goes out to Anna Listwan for taking the lead on the logistics for this event. We sold between 26 and 72 tickets per basket and ended the event with a $1,200.00 profit. This raffle was held to support the resource room at the Menomonee Falls school district. This donation will help to provide coats, ski pants, hats and mittens to area children when fall/winter sets in.

Before the next meat raffle, OA5 is going to work on improved signage for the events and the 50/50 raffle table, a printable menu of baskets for attendees to have during events, a plan to have Optimist club information available at the event and a meat raffle planning guide for future reference.

Our next event will be in September when there will be the bags tournament and meat raffle at the Knights of Columbus Hall. The date will be confirmed soon and will be advertised beginning in August. We are planning a Crock Pot Meal theme and would love it if members would share their favorite recipes with us so we can include them in the baskets. Please send crock pot meal recipes to shannon.dederich@gmail.com. 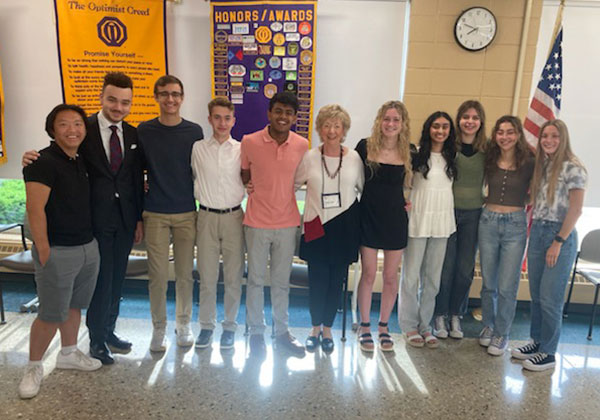 Cathy Hazzard welcomed and introduced our MFHS Scholarship winners. Our club awarded scholarships to ten graduating seniors. They attended our June 1 meeting. Congrats to the students and hank you to all of the members who help raise funds for these scholarships. 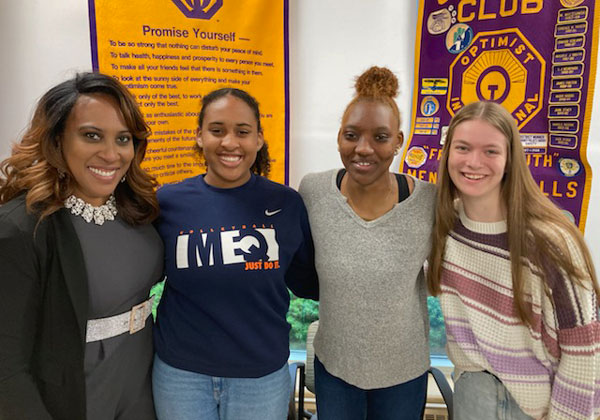 Club member, Dr. Carolyn Anderson presented a very interesting and informative “Your Mind Matters” at our June 8 meeting. She talked about the connection between the mind, brain, Optimism and one’s well being. 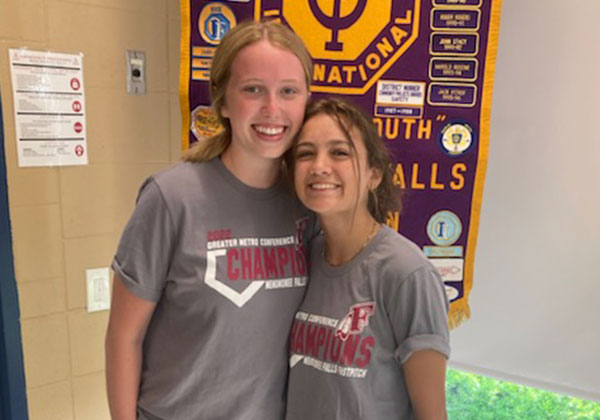 a. none this month

a. No update, but the Foundation has received the official IRS approval of our application for recognition as a charitable organization.

7. Anything else for the good of the club

a. New Member approval: Bob Schneider, Camelia Clarke, Marcel Clarke
b. Packer raffle planning is under way, Tom Ciscoski will learn/work with Ed as he is on the DL
c. 2022-23 Board Positions will be finalized by the first week of July to notify club and have vote second week of July at the Wednesday meeting

9. The meeting was adjourned at approximately 7:55 a.m. after a motion by Tom, second by Fred. 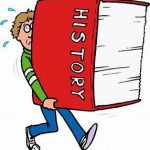 Independence Day Parade is cancelled due to rain and lightning. Many entries demand payment anyway. Many demands are lowered through negotiations. 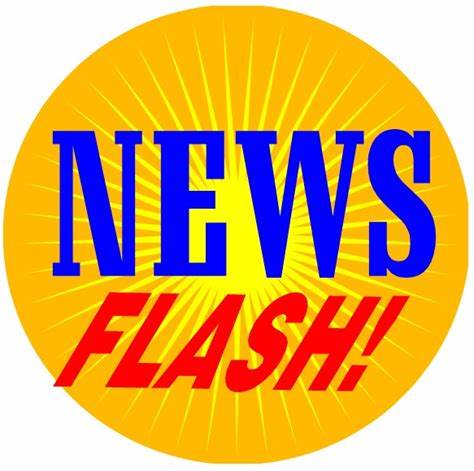