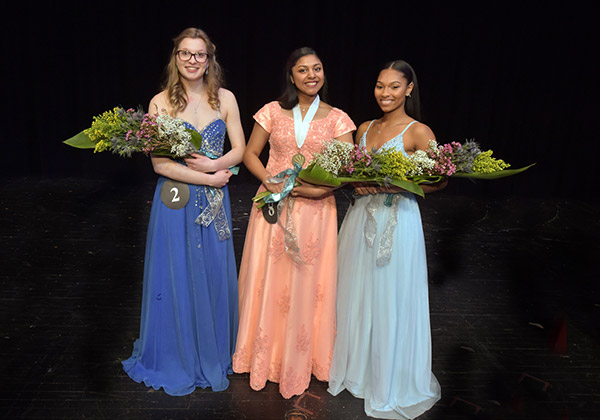 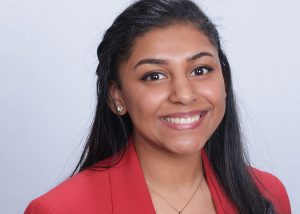 Veronica Goveas of Menomonee Falls was named the Distinguished Young Woman of Wisconsin for 2021. She will represent Wisconsin at the 64th National Finals to be held June 24-26, 2021.  She was selected the Wisconsin representative at the state competition held February 14, 2021 in South Milwaukee. Along with the title, Veronica won preliminary awards in Scholastic Achievement and Interview. The national program will be a virtual program again this year.

Veronica is daughter of Mary and Joseph Goveas. She will graduate from Menomonee Falls High School in June with plans to attend college to study either biological or health sciences pursuing the pre-med track.  Her career goal is to become a physician-researcher. Between now and mid-June, Veronica will be learning a fitness routine, polishing her interview skills, and rehearsing an Indian semi-classical dance for her talent.

This is exciting for Menomonee Falls as we have not had a state winner since 1990!

Veronica’s successor will be chosen at the 2022 Distinguished Young Women of Menomonee Falls program to held virtually at the end of April. Participants will be recorded performing talent, fitness, and self-expression on April 28. Zoom interviews with program judges will take place May 1. That evening, the girls will return to the stage to record the awards ceremony. Falls Cable Access will put together the footage and broadcast the program on their channel or on demand on their website.

Ten Menomonee Falls High School Juniors participated in the 56th Annual Distinguished Young Women Program on Saturday, February 22, 2020 at the North Middle School Auditorium. The Optimist Club has sponsored and organized the program since 1986. The participants will be attending the Optimist Club meeting on March 4.

Veronica Goveas was named the Distinguished Young Woman of Menomonee Falls for 2021. She will represent Menomonee Falls at the Wisconsin State Program to be held in Franklin, WI this summer. Veronica is the daughter of Mary and Joseph Goveas. She performed an Indian Semi-Classical Dance for her talent. Veronica was also won the Scholastic, Talent, and Self-Expression Awards. She will receive a $2500 scholarship from the Optimist Club.

Madisyn Harrison was named 1st Alternate. She will receive a $1000 scholarship from the Optimist Club and $300 cash award from Community League of Menomonee Falls.  Autumn Seebach was named 2nd Alternate and won the Fitness and Spirit Awards. She receives a $500 scholarship from the Optimist Club. Krithika Senthil won the Interview Award. The Be Your Best Self Essay Award went to Elise Poos. Each category winner will receive a $100 cash award.